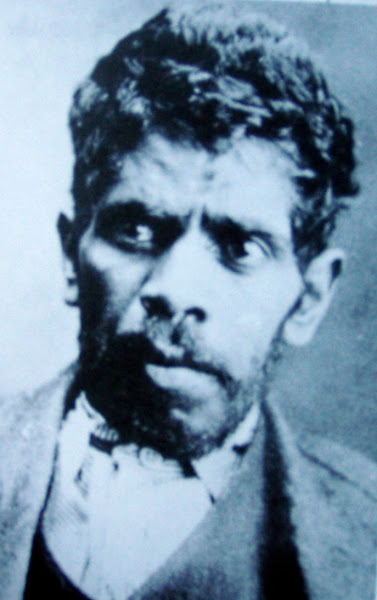 Trying to record the 'true' story of Jimmy Governor is very difficult because there is so much conflicting information and factual errors to be recognised and corrected if possible along the way.
The advantage of so many books having been written about Jimmy Governor is that each author has had the opportunity to double check what has been written before and expand on this.
That is what I am trying to do on this blog.
Answer the still many unanswered questions, and resolve the contraditictions, that have arisen for me when reading these books.
The narrative waters have become very muddied over the 111 years since Jimmy went off the rails, and they can only be made clearer by patient perseverance.
By checking all the facts, and so called 'facts', and pointing out any discrepancies.
I will deal with the most blaring ones individually here:
*
1. Tommy Governor, father of Jimmy, told a Mudgee newspaper that he was born on the Gwyder River.
But when he was incarcerated in Maitland Gaol, he stated his place of birth was the Barwon River.
Either birthplace
*
When was he born?
Maitland gaol records say 1834.
They also say he had initiation scars on his chest, so he was a full-blood Aboriginal.
Moore and Williams say he was said to have been born on the Maranoa River, but that the Rouse family claimed he was born on one of their properties on the Barwon River.
*
2. Annie Governor, mother of Jimmy.
When was she born?
According to authors Moore and Williams, Annie told the police in 1900 that she was 56, meaning she was born in 1844.
But according to Murray Garland, author of the latest book about Jimmy Governor, Blood on the Tracks (2009), she gave her age as 50 when she was interviewed by the police at Wollar in 1900.
Seven years later she again said she was 50 when she married William Free,15 years her senior, in Brewarrina.
All of this conflicting information means she was either born in 1857, 1850 or 1844.
So she was either 18, 25 or 31 when Jimmy was born.
Annie had three children before Jimmy - Tommy Jnr, Abe and Alice.
Her daughter died while the family was living on the Hobbins property at Leadville and is buried there. would indicate that he was not a Wiradjuri man, but from a different group of Aboriginal people.
The Barwon is the next tributary of the Darling River west of the Castlereagh River.
The Darling was also known as the Barwon.

*
Where was she born?
In 1900 she told the police she was born on Andrew Brown's Caigan station.
This was on the Castlereagh River, 10 miles from Mendoran.
Eric Rolles in his book, A Million Wild Acres, a chapter in which deals with the Governor story, supports this claim.
ANDREW BROWN, a wealthy squatter, had a depasturing licence for Craigan for the year ended 30-6-1847.
However, it has also been suggested that she was born on the first farming property on the Castlereagh River, Ewenmar, owned by RICHARD ROUSE.
Tommy, whom she married, had worked on properties owned by the Rouse family, and the Rouse family claim he was born on one.
*
Another claim, made by one of her descendents through one of Jimmy Governor's younger brothers, Charlie, is that she was a north-eastern Wiradjuri woman from upper Gudgegong River around Mudgee and Gulgong.
Mudgee was in Wiradjuri country, but Gulgong, on the other side of the Great Dividing Range, was Kamilaroy.
Moore and Williams claim Annie was buried on Hobbins' property at Leadville with her daughter.
*
In 1870 there was a murder on Caigan and the killer was placed in the Denison Town lock-up.
*
Both Jimmy and his mother were born not very far away as the crow flies from Breelong.

There are very few official recorded dates of birth, death and marriages for the Governor family.
The only readily available date of birth for Jimmy's father, Tommy, is from the Entrance Book when he was admitted to Maitland Gaol in 1890.
*
Jimmy's mother, Annie Fitzgerald, fibbed about her age, always insisting she was 50 in her latter years.
Her youngest child, Roy, was born in March 1895.
If she was 45 at that time, she was born in 1850.
This means she was 16 years younger than Tommy.
It was traditional in Aboriginal society for a young woman to marry a much older man.
*
Annie claimed to be born on the pastoral run, Caigan, owned by Scotsman, Andrew Brown.
According to a newspaper article of 18 October 1892, he was at that time 98 and living with his son, J L Brown, at Bowenfels near Lithgow.
Brown had come to the colony 70 years ago (in 1822 aged 28).
It was reported that the family were known for their wealth and their charities.
In March 1870, there was a murder at Caigan when as man was stabbed with sheep shears.
The killer was placed in the nearby Denison Town lock-up.
Andrew Brown would have been aged 76 at the time.
*
The only recorded date of birth giving the day and month is for Roy Governor.
*
Jimmy's nephew, Peter Governor, said to be 10 at the time of the murders in July 1900, may have been the son of Tottie, but she was 24 at the time which meant he would have been born when she was 14.
Alternatively he must have belonged to one of Tommy's older deceased siblings.
During the police investigation after the Mawbey murders, the police realised that Peter Governor was older than he looked.
It was eventually discovered that his real name was Peter Porter, which suggests he was a relative of  the old man Jackey Porter.
He was also known as 'the crooked' because he was deformed.
In his latter years, he accompanied missionary Retta Dixon on some of her travels around the NSW countryside.

GOVERNOR FAMILY TIMELINE
1834
Tommy Governor born on the Barwon River. [Source: Index to Gaol Photographs, State Records NSW]
1850?
Annie Fitzgerald born to Aboriginal mother, Polly, and white father, John (Jack) Fitzgerald, an Irish stockman, at 'Caigan', a station owned by Scottish squatter, Andrew Brown, 10 miles from Mendoran. ['Breelong' was in the same county of Bligh, west of Mendoran.]
1868-1873?
Tommy and Annie have three children, Tommy Jnr, Abe (Abraham) and Alice. They do not appear to be alive by the time Jimmy is born. One of the boys and the girl are thought to be buried near the Talabragar River near Leadville, possibly on property owned by the Hobbins family who gave them refuge.
1875
Jimmy Governor born. His father was 41 and his mother around 25. He variously gives his place of birth as Talbragar (near Dubbo) and Deniston Town. His descendents today claim he was born at Leadville.
1876
Tottie Governor born?
1877
Joe Governor born?
1884
Dinah Governor born?
1886
Governor family living at Gresford in the Hunter Valley.
1887
Tommy Governor, 53, finds silver on the eastern boundary of 'Pine Ridge' station near Leadville where he and his family were living; allowed to build a house on 10 acres of a common at Wyaldra (Reedy) Creek on northern outskirts of Gulgong.
1889
Charles Governor born?
1890
Governor family living on the St Clair Aboriginal reserve at Singleton; in August Tommy, 56, stabs another Aboriginal man with a pen knife at the reserve; Jimmy aged 14 was a witness.
10 July 1890
Jimmy is convicted of horse-sweating (the equivalent of 'joy-riding' in a car today) and of trashing a school classroom at Gresford in the Hunter Valley. He is homeless with no family support and reliant on the public to feed and shelter him. Jimmy is sent to a boys' reformatory, a ship called the Vernon moored off Cockatoo Island in Sydney.
3 September 1890
Tommy is sent to Maitland Gaol for the stabbing incident on a reduced sentence on ground of provocation [it was possibly a tribal law matter, about disrespecting personal space].
1893
Jane Governor born?
16 February 1893
Jimmy, aged 18, is sentenced to 1 month's gaol for 'horse sweating', riding someone else's horse without their permission. [Source: Entrance book, Darlinghurst Gaol, 1900]
5 March 1895
Jimmy's youngest brother, Roy, born at Mudgee.
1896
Jimmy, aged 21, starts work as a black tracker at Cassilis police station.
December 1897
Jimmy suddenly quits his job at Cassilis and leaves town because threated with shotgun marriage by father of a white girl (according to Ethel Governor, who was an underage pregnancy before she married Jimmy two years later).
December 1898
Jimmy marries Ethel Page, 16, who is five months pregnant with his child in the rectory of St Luke's Church of England at Gulgong.
Sunday 9 April 1899
Sidney Governor is born at Gulgong.
1900
Tottie Governor, Jimmy's younger sister, marries John Coombes at Brewarrina.
May 1900
Tommy Governor dies at his house at Gulgong aged 66.
23 November 1900
Jimmy is admitted to Darlinghurst Gaol. The Entrance Book gives his occupation as a 'horse breaker' (rather than 'labourer'), his religion as 'Church of England', his education 'read and write', his height 5'71/2" and weight 132lb. He is subsequently convicted of murder and sentenced to death at Sydney's criminal court at Darlinghurst.
18 January 1901
Jimmy Governor is hanged at Darlinghurst Gaol.
1907
Dinah Governor has son, Charlie, at Brewarrina. [No father recorded on NSW BDM record.]
7 March 1918
Roy Governor, 23, residing in Goulburn Gaol.
1921
Peter Porter, the deformed uncle of Jimmy Governor, son of Peter and Jane Porter, dies at Peak Hill (an Aboriginal settlement roughly half-way between Parkes and Dubbo).
27 November 1923
Roy Governor, 28, residing in Bathurst Gaol. Occupation 'labourer', religion 'Presbyterian', height 5'5", weight 10st 2oz.
1957
Roy Governor dies at Peak Hill.